Sometimes I want to eat chocolate. Just chocolate… Nothing else… And A-LOT of it. Yep, I’m definitely human! When I’m sitting there eating my chocolate, I think about the creamy richness. I think about it melting away to nothing in my mouth, and then I think about having another one… And... Another one.
I used to feel bad about enjoying chocolate. I knew that while I was ‘self soothing’, I was also feeling guilty about that huge load of refined sugar, fat and additives that I DID NOT NEED… And then there were these things called HIPS that liked to appear out of nowhere and say “HELLO!” (that’s code for: “HELL-NO!”) every time I indulged!

It’s a continuous cycle: With that first bite, everything is just glorious and chocolate (or should I say SUGAR) is the star! The sweet stuff becomes the life of the party. At the end of the celebration, you feel like you’ve been ‘gate-crashed’ and all you want is for that low-energy-crappy-feeling to LEAVE!
But WHY? Does it really have to be that way?
Can’t we just POP A CHOC when we feel like it and survive the aftermath?

Because I have the perfect solution… My Vanilla Maple Pecan Delights!

These little beauties are filled with: 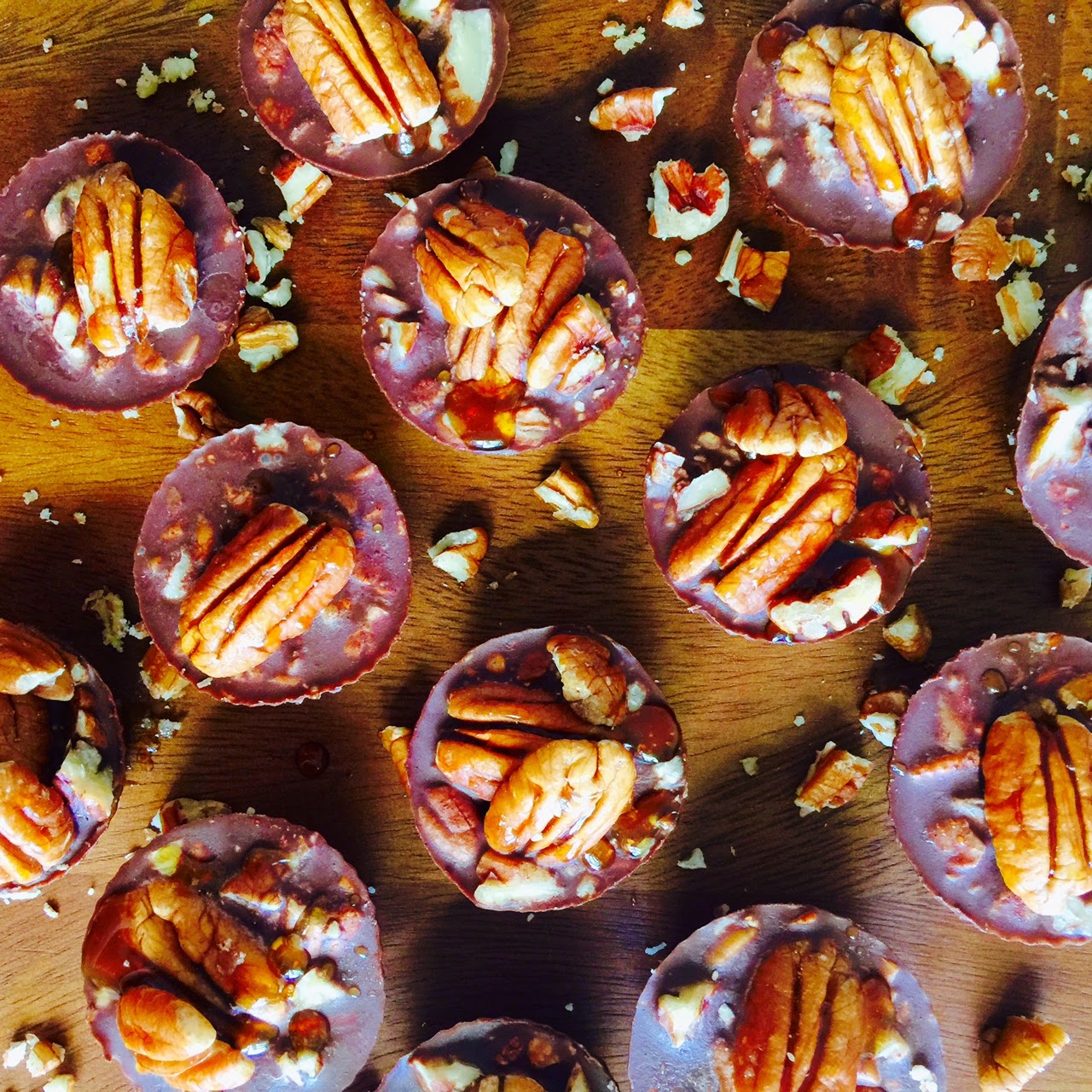 1.     Remove the seeds from the vanilla pod. Run the knife from one end of the pod to the other, so that the pod is halved lengthways. Take one vanilla pod half, and scrape the blade along the inside edge of the pod to collect the seeds. Do this with the other half. Cut the deseeded pod halves across the middle, so that you also have 4 pod strips.
2.     Place the vanilla seeds and pod strips into a glass jug.
3.     Along with the vanilla, add the cacao butter and cinnamon to the same jug.
4.     Melt the cacao butter over the stove by placing the glass jug in a saucepan of simmering water.  The vanilla and cinnamon will infuse into the cacao butter as it liquefies.
5.     Leave the butter to melt, stirring occasionally.
6.     Roughly chop the pecans. Line up your chocolate moulds on a tray. Evenly distribute the chopped pecans amongst the moulds. Save some whole pecans for decorating at the end.
7.     Return to the jug of melted cacao butter. Remove the vanilla pods from the jug.
8.     Add the coconut oil, cacao powder, tahini, maple syrup and pink salt to the melted cacao butter mixture.
9.     Continuously stir all ingredients while the jug baths in the simmering water. Everything should be completely dissolved and evenly combined.
10. Pour the chocolate mixture into the chocolate moulds.
11. Decorate the tops of the filled moulds with whole pecans.
12. Place the tray of chocolates in the fridge to set for at least 20 minutes.
13. Keep chilled until ready to eat. Remove the moulds and drizzle maple syrup over the top (optional) before serving. Tastes and looks DIVINE! You can also store these beauties in the freezer.

Now you can indulge for all the right reasons! No guilt allowed!

WHERE TO FIND THE INGREDIENTS:
*You’ll find some of these wonderful ORGANIC ingredients right here at the NourishMe Whole Heartedly online shop. YAY!